Good Morning, Mr Sarra: My Life Working for a Stronger, Smarter Future for Our Children


Hodges is consoled by his dad and his wife, Thurston sits on the ground with his daughter who holds her favourite black baby doll and gives her tired-looking dad a hug and a kiss: excellence and humanity at its best. Earlier in the day I had approached Malcolm Turnbull to congratulate him on his ascendency to the prime ministership and, as I described, his clever appointment of Senator Arthur Sinodinos to the role of Cabinet Secretary. As I mentioned to him, at least now we can have something that resembles a functional cabinet as opposed to the crippling centralised way of governing that many of us had become so frustrated by.

The Minister for Indigenous Affairs must be trusted and able to get on with his role, without distractions and confusion about who is responsible for what. So here I am offering just three things that we can do in the Indigenous policy space to make a difference. On a level playing field we saw the humanity of Indigenous Australians authentically acknowledged, embraced with enthusiasm, and celebrated with passion.

We saw young Indigenous Australians nurtured by hope, which cultivated their strengths and excellence and encouraged them to chase down their dreams, no matter how lofty they seemed. We saw Indigenous leadership working with non-Indigenous leadership together in an elite and honourable, high expectations relationship. This is the perfect analogy for the Australian society we can develop. There are three things we can do:. It is always a complex and, for many, hurtful challenge to reflect on the past in such a way that we learn from the awful tragedies of our shared history, without letting it define us in an unproductive way that can stifle our quest for shared emancipation into an honourable future.

The truth is there have been, and continue to be, many very clear and graphic examples of where the humanity of Aboriginal Australians is either not embraced and acknowledged, or simply undermined. 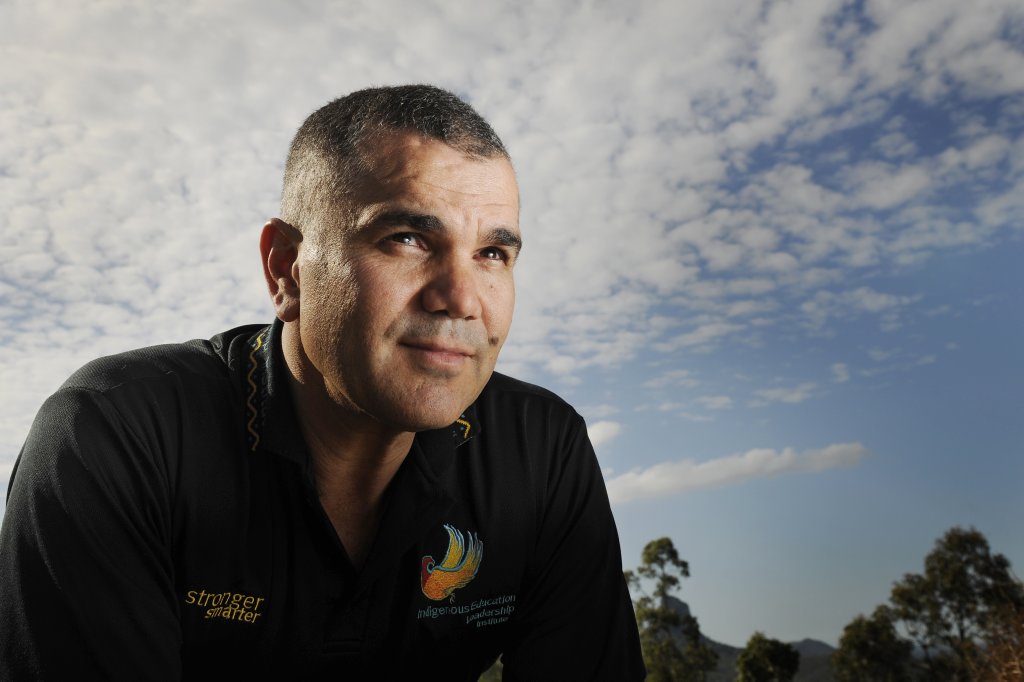 At the risk of rendering some gross misbehaving and poor choice-making individuals not culpable for some despicable behaviours, I would argue quite strongly that when we treat individuals as though they are subhuman, then subhuman behaviours are likely to emerge. I have never backed down from calling out such injustices from both sides of this relationship, but on this occasion let me reflect positively on the example I gave at the outset of this lecture with our two Indigenous NRL grand final captains after the game on that level playing field, embracing each other, and then embracing their families.

Our humanity exists and it must be acknowledged. It is worth embracing and celebrating. Our humanity has existed for tens of thousands of decades on this land we now share, and it continues to exist proudly, despite the efforts of post-colonial governments to smash us and smash us and smash us. This is not an invitation to smash us even more, but rather an opportunity for you to understand that such efforts are futile and our humanity cannot ever be assimilated, nor destroyed.


To help us understand this more deeply, let me reflect on some of my earlier work inspired by the late and very great modern day philosopher, my dear friend Roy Bhaskar. We are all of the human race and this should ensure unquestionable grounds for human rights. The key to understanding the importance of the concept of the concrete universal is that it is part of a stratified ontology, or stratified insight into our sense of being.

Put simply, each of us has layers or stratifications of being. As well, the notion of processuality allows one to recognise that at differing times in the life of the individual, the mediations or the individuality upon the core humanity can be of greater or less salience. Significantly, my sense of being Aboriginal or Australian is not relinquished here; it simply does not resonate so strongly.

At my core here I remain human and this humanity is shared with those around me. My sense of being Australian resonates strongly here, given the time, place and context. In such times when tragedy strikes we stick together as Australians and we just get in and help. In this circumstance I have not surrendered my sense of being Aboriginal or my sense of being Italian. Understanding and embracing the notion of a stratified ontology not only liberates Aboriginal people from the toxic dynamics of being forced to be mainstream, it is indeed an intellectual concept that is emancipatory for white Australians.

Many white Australians have experienced this also, perhaps unknowingly.

Importantly they have not surrendered their sense of being Australian, but their sense of humanity is enhanced. Acknowledging, embracing and celebrating our humanity means you would never amend the Racial Discrimination Act especially to inflict policy approaches on us in a way that would never be inflicted upon other Australians.

Acknowledging, embracing and celebrating our humanity means you would find the courage to contemplate some form of a treaty, a document upon which we both agree, no matter how long or complex this task is. Again as we watched the NRL grand final, won by the Cowboys, we witnessed Indigenous excellence manifested, and borne out of the seeds of hope, sown many years earlier.

I get to see very solid young men and women, playing rugby league for their country at the elite level, knowing that at some stage many years earlier, they dreamed of being a Kangaroo, or a Jillaroo.

These dreams can only manifest when they are nurtured by hope. If politicians and other policy makers operate from a philosophical basis that acknowledges and embraces the humanity of Indigenous Australians, there is scope for policy approaches and programs to nurture hope and optimism rather than entrench despair. When it comes to constructively aligning people, philosophy, policy and programs, we must understand that ultimately we are dealing with a relationship.

The relationship is of course the one between Indigenous and non-Indigenous Australians. Both parties have a responsibility to tend that relationship and to ensure that it is healthy and a source of mutual benefit.


My own research, triangulated by our shared instincts, shows that the relationship is not as healthy as it should be. It empirically unveils a world of ambient racism and unhelpful yet persistent negative stereotyping of Aboriginal people. This fast thinking consists of slurs, insults, names, sayings, jokes, opinions, metaphors, metonyms, and slogans.

There is no need for me to rehearse with you the world of fast thinking about Indigenous Australia. People still believe that Aboriginal Australians have lots of privileges despite all rational and statistical evidence to the contrary. The language of fast thinking is a house of being and it determines how we think and act. This is why fast thinking is influenced, not by rational slow thinking, but by alternative fast thinking.

It seems clear our current Prime Minister knows this. Today, after being offered alternative fast thinking, and told this is a time for hope and optimism and there has never been a more exciting time to be Australian, we find ourselves as a nation tentatively embracing a more authentic dialogue about tax reform. My simple point here is that the fast thinking, or the policy rhetoric if you like, often does more to entrench a sense of hopelessness and despair rather than nurture a sense of hope and optimism.

What I find grossly offensive is this dynamic in which we home in on extremely toxic and subhuman behaviours and conflate their existence as if all Aboriginal people are behaving in such ways.

Roy Bhaskar would call this the epistemic fallacy. Briefly, this is the reduction of being or reality to our knowledge of it; or, if you like, the refusal to make a distinction between ontology and epistemology. Another way of explaining this is that makers of Indigenous policy, including government-anointed so-called leaders, do not understand the fundamental importance of a strength-based approach to community and individual transformation.

Even those who enjoy choreographed visits to Aboriginal communities cannot fully understand the depth of complexity required to be useful, especially if they listen and observe simply to confirm their own way of thinking, rather than listening and observing to really understand.

Yet their unsophisticated, deficit-based elucidations expose them as impotent amidst the profound need for stratified, strength-based approaches to individual and community transformation, and almost completely ignorant amid the profound need for deep and compassionate understanding of the stratified ontology of Aboriginal people and their communities.

When I worked as school principal in Cherbourg for six and a half years, we fixed attendance with a sophisticated and stratified strength-based approach. Thirty-eight per cent of children were not attending school. We recognised that 62 per cent actually were engaged and if we celebrated and reinforced this great strength both extrinsically and intrinsically, then we were likely to positively influence most, but probably not all, of the remaining 38 per cent. By acknowledging and celebrating the strengths on display, attendance went to 94 per cent.

The remaining six per cent had more hardcore needs and so we pursued this as best as we could, in a more low-key way. I was in Warburton in remote Western Australia as recently as last week. Not only do they not make sense, they are causing an even greater sense of despair and disengagement from Australian society. This is an aspect of the stratified ontology of Aboriginal people that your makers of Indigenous policy simply do not understand.

We will not become the people you want us to be. We will submit in some way but in a way that will see us become passive, simply disengage or readjust because we are so accustomed to you smashing us and our communities. I am sure some of you may have seen this passivity and disengagement, without even knowing you have seen it.

A lack of desire to invest substantially into innovative, vibrant and sophisticated localised economies entrenches ongoing chronic disengagement. But you have never been seriously challenged to understand the deep complexities here! You have never been challenged because in order to seduce you, it is better to pretend you are not culpable in any way for the challenges we face. If I can make it seem like Aboriginal people are entirely to blame here, you will describe me as a hero and you will throw millions at me and never seriously question the efficacy of my approaches, even if they take us back to the policy approaches of the last century.

You have never been challenged because frankly there is great power and money to be had from the entrenched despair of Aboriginal people.

Personally I think this reluctance to challenge underestimates your intelligence and your humanity, leaving us all floundering with limited hope of transcending the challenges we face together. Not to pick a fight with him, but because I respect his interest in a positive future for all of us. I respect his intellectual and emotional capacity to embrace and be honest about the extent to which he is culpable in a high expectations relationship with Aboriginal Australia and I am committed to the same.